According to Wikipedia, in 1992 His Royal Highness Sultan Qaboos bin Said Al Said held a competition to design and build a Grand Mosque. Construction took six years to complete and the result is a stunning reflection of Islamic architecture.

The mosque occupies an area of approximately 416,000 square metres and can accommodate up to 20,000 worshipers within the grounds.

The external dimensions of the main prayer hall are 74m x 74m, with a central dome that rises 50 metres from the ground. Up to 6,500 people can pray at any one time within the main hall.

Hanging within the dome is the former Guinness world record holding 14 metre high Swarovski crystal chandelier that weighs a staggering 8.5 tonnes. It took four years to build and, until recently, was the largest chandelier in the world. 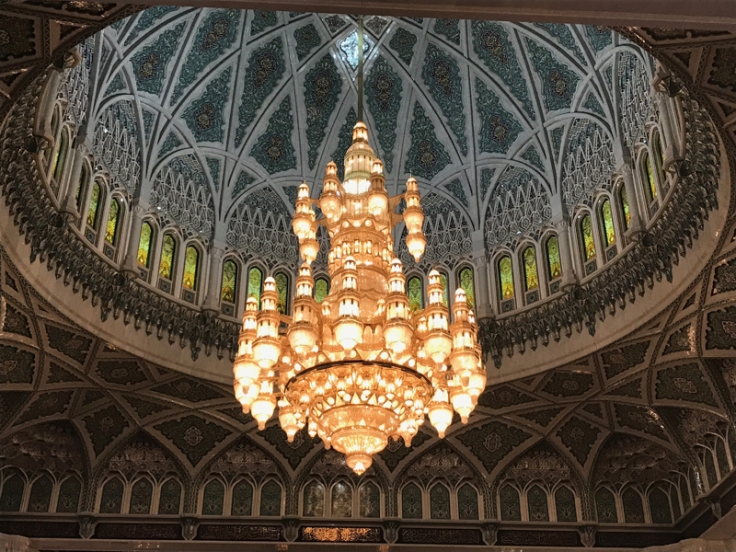 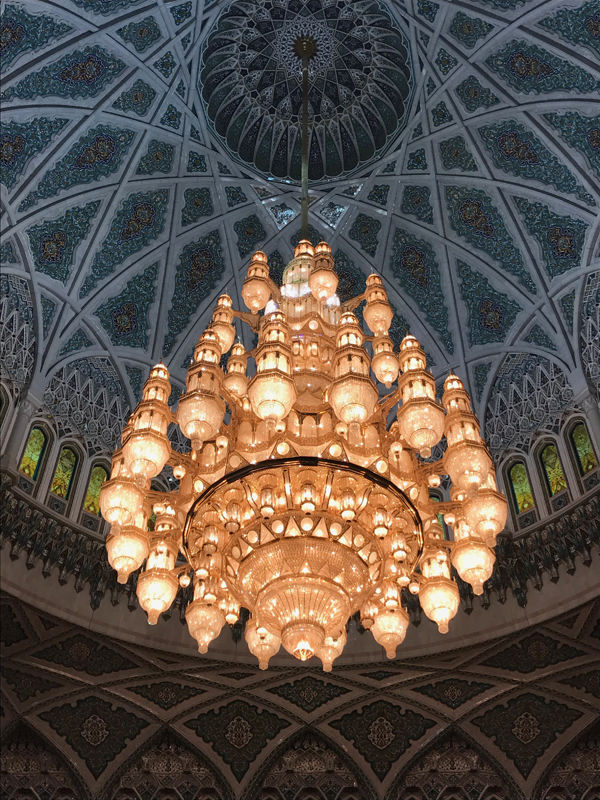 Underneath the 600,000+ glittering Swarovski crystals is arguably the second biggest hand-woven carpet in the world comprising 1,700 million knots and weighing 21 tonnes. Apparently it took 600 Iranian women 4 years to make. The size and scale of this rug made it hard to photograph properly.

There are sixteen smaller chandeliers lining the edges of the main prayer hall.

The mosaic pattern of the Mihrab (below) deserved a closer inspection however the crowds on the day of our visit just would not allow this to happen. Built in the traditional semi-circular way the Mihrab indicates the direction of Mecca and hence the direction that worshipers should face when praying.

Buildings and walls surrounding the main prayer hall were inspired by traditional Omani fort architecture and incorporate verses of the Quran into the design.

Many of the internal walls have small niche’s like the one below that incorporate the Islamic motifs of other cultures. This one reflects ‘a contemporary interpretation of the patterns and designs which flourished during the reign of Tamerlane (1336-1405 AD) ruler of Central Asia’.

There are also fine marble ablution rooms for men and women.

Within the grounds are five minarets that symbolise the five pillars of Islam being Shahada (faith), Salat (prayer), Zakat (charity), Sawm (fasting) and Hajj (the pilgrimage to Mecca). The four smaller minarets occupy the corners of the mosque and a larger central one located adjacent to the dome. 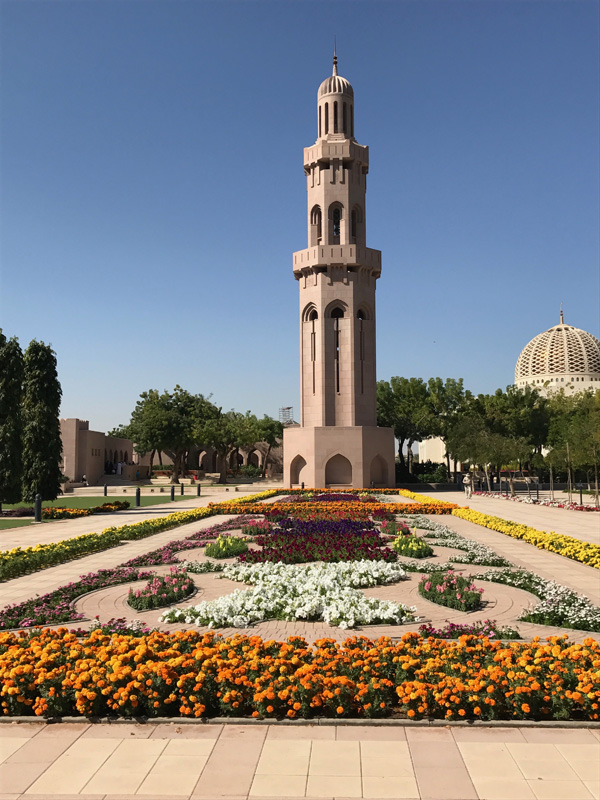 The height of the central minaret (below) reaches 91.5m and has a 10.9 metre square base. From here the call to prayer is broadcast over the city six times a day.

Non-Muslims are welcome to visit the Grand Mosque between 8:00am and 11:00am any day other than Friday and it is definitely worth a visit. Please dress conservatively though out of respect for your hosts. Men should wear long trousers and have their shoulders covered, whilst women should have a covered head and arms, with either long trousers or a long skirt.

If you are unable to visit the Grand Mosque please feel free to check out the 360 degree virtual tour provided by the Sultan Qaboos Grand Mosque official website.