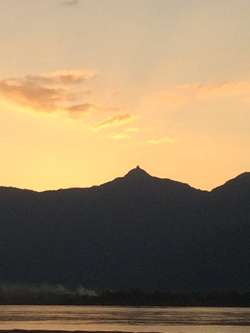 The Wat Phou is a ruined Khmer Hindu temple that forms part of the Champasak Cultural Landscape, which is a well preserved landscape more than a 1,000 years old.

According to UNESCO’s website, “It was shaped to express the Hindu vision of the relationship between nature and humanity, using an axis from mountain top to river bank to lay out a geometric pattern of temples, shrines and waterworks extending over some 10 km. Two planned cities on the banks of the Mekong River are also part of the site, as well as Phou Kao mountain. The whole represents a development ranging from the 5th to 15th centuries, mainly associated with the Khmer Empire.” [1]

It resides at the base of Mount Phou Kao, a curious formation with a natural linga at the top that is supposed to represent the phallic symbol of Shiva. Personally I think it looks more like a nipple than a penis, but that’s just my opinion.

The original temple dates back to the 5th century, however the remaining structures are circa 11th to 13th century. At the top of the temple is a fresh water spring where it is believed that Shiva used to bathe. The spring water flows through wooden troughs and into large stone vessels pictured below. Visitors splash their faces with the water as a type of blessing, or for good luck.

One thought on “Wat Phou Part One”