With my novel ‘Pine Gap’ now being published through Amazon Australia, UK and worldwide Kindle and paperback. I thought I would share a synopsis for you so you can see what all the fuss is about.

Deep in the heart of the Australian desert an impenetrable military prison is being invaded by an insidious aggressor. Time is running out for the small defence force who are no match for rotting corpses, giant spiders, voracious sabellids and the other alien beasts that begin appearing around the facility. As the indiscriminate killings continue only the arrival of Colonel Gabriel Drax gives the fractured team any chance of survival. But will this brilliant tactician lead them to safety, or is he too late?

Pine Gap is a science fiction / action novel set in the thirty first century. I chose to use Pine Gap as the main setting because of its remote presence in the Australian outback and the fact that public knowledge about what is actually at Pine Gap is more conjectural than fact. A quick search on the Internet will provide the reader with many theories both plausible and fanciful as to the true workings of this facility. Pine Gap’s mystique makes for good subject matter.

In my novel, Pine Gap has been converted into an impenetrable prison where the hardest criminals in the Universe are sent. Its construction is entirely underground and so well defended that it has also become a databank for the intellectual property of all the peaceful nations within the galaxy. Bank accounts, patents, military secrets etc are stored here alongside monsters, terrorists and captured enemy Generals. In spite of all its security however, someone is managing to get in.

The main protagonist is Colonel Gabriel Drax. He is a highly decorated officer and a skilled military tactician who was born in Australia and has been brought to the Gap in order to provide security. Gabriel suffered an accident as a child, which required in experimental surgery to be performed on his brain. As a result of his many operations Gabriel often has vague nightmares warning him about the future. All the while that he is trying to build a defensive position he is bombarded by an abstruse extrasensory perception. He knows that he is going to be betrayed but he does not know if it will be his friend, his enemy or his lover.

The other main characters are:

Admiral Dargan – He is the incumbent commander of Pine Gap who places Colonel Drax in charge. Gabriel knows that Dargan is developing something sinister in the bowels of the facility and it doesn’t take long to deduce what that is. Dargan has a long history of incompetent leadership and as a result he is despised by many of his subordinates especially Colonel Drax.

Major Katana May from Military Intelligence who is Admiral Dargan’s niece. Katana has a fiery temper, which lands her in hot water on more than one occasion. Gabriel develops a fondness for her regardless of her relationship to Admiral Dargan and in spite of the fact he knows she has been ordered to spy on him.

Captain Sebastian Botha who is Gabriel’s closest friend. Sebastian is a loyal soldier and confidant who would follow Gabriel into the depths of hell if need be. Their friendship was forged over years of fighting side by side during various campaigns throughout the Universe. Sebastian enjoys telling stories of their battles to the other troopers and sharing bourbon with his friend.

Lilakoi Paige who is the Chief Science Officer and Gabriel’s love interest. Lily is an incredibly intelligent scientist whom Gabriel is always trying to keep up with. She was brought to Pine Gap to assist Admiral Dargan achieve his insidious goals but she is in love with Gabriel and cannot seem to focus properly on her efforts. The more she falls for him the more she becomes conflicted about her actions.

Lieutenant Nick Schiffiletti who manages the Communications. Nick is a young, small-framed boy in his early twenties with a natural flair for computers. He is in charge of ensuring that Admiral Dargan’s communiqués are kept private and that the experiment remains a secret. He is also somewhat of a military historian with a deep respect for the Drax family. The arrival of Gabriel makes Nick think twice about his part in the Admiral’s deception.

Declan Sharkey, a mercenary who is leading the invasion. Declan is an ex soldier who was too violent to remain in the armed forces. He is an evil, smooth talking murderer who leads a group of insurgents with similar tendencies.

The Jones Brothers are three humanoids from the planet Tortia who are financing the mercenaries. Tortians are a race of people who have been genetically enhancing their appearances for generations. As a result their DNA has changed to the point that they all look exactly the same. The downside is they have become genetically perfect geniuses that are also criminally insane.

Garou, a shape-shifter and tribal chieftain from Scarag. He and his family are being used as pawns in the Tortian’s plans.

There are many other minor characters that will engage the reader in their own unique way. There is Fricassee Phil, the ancient chef who dispenses wisdom alongside his bacon and eggs. The grim Master Chief, leader of the last remaining squad of Red Cap soldiers in the Universe. Mo, the gruff Tullimbar Sergeant who befriends the Master Chief in spite of their differences and General Garorky Katarg a high ranking officer of the Magadatch army who are at war with Earth and our allies.

Throughout the novel the characters develop and change. Friends become enemies and enemies become allies. There is love, death and romance intermingled with jealousy, greed and infighting as Gabriel attempts to unite the troops and repel the invaders. Families splinter and murderers are exposed as the troops learn to trust one another and their leader in a desperate bid for survival.

Click on the image below for more information on Pine Gap. 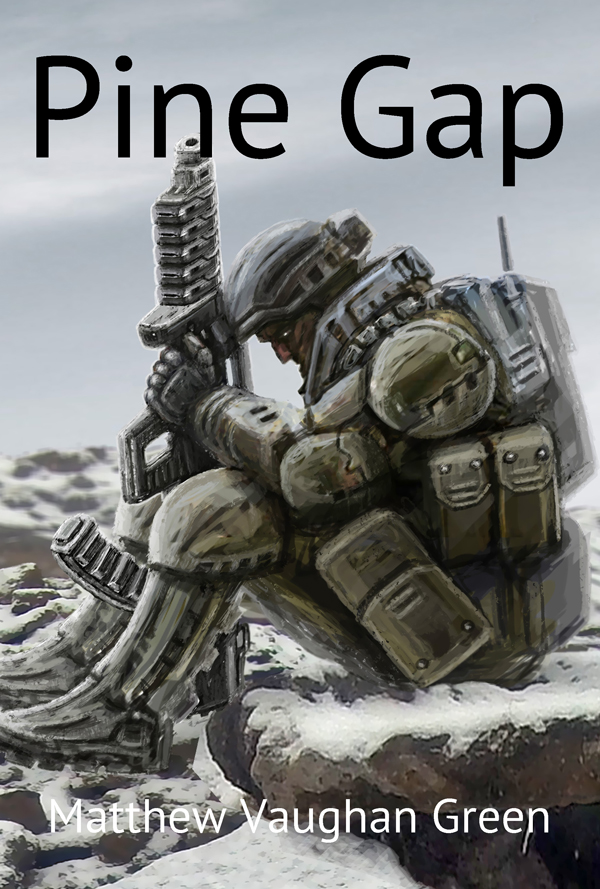